It's Christmas time once again.  And once again we had to do the dance of when and where are we spending Christmas Eve.  Since my family and HDT's mom celebrate on the 24th it's always an issue of time.  Usually we're at my families in the late morning into afternoon/evening then leave there to go to his mom's for the rest of the night.  His dad has had Christmas Day since his parents split up.

But every so often the holiday falls just right that we can move one of them to the 23rd.  I know my family has done it at least a couple times over the last 15 years.  His mom we were able to convince to do it in 2011.

After much discussion it turns out this Sunday the 22nd actually ended up being a good day for my family to get together.  Better even than the 24th after all was said and done.  I'm a little disappointed his mom didn't seem more pleased that she gets the 24th afterall.  But whatever.

We have all but two of the kids gifts completed.  Bought a Santa figure for his mom but that's more of a side gift.  We're looking at printers for her since she could use one.  Have no idea what to do for my mom or his dad and Dorothy.  And we only have a couple days left.  Ugh.

So today at work is our at work Christmas party.  As in we get lunch and do the White Elephant game which we started doing last year.  And this year we added an ugly sweater contest.  No way will I win, knew it going in.  And definitely when one of the girls came in with her homemade sweater.  She cut out a Christmas tree shape from another sweater, an ugly green material and attached it to a red sweater she had.  Put a bunch of jingle bells of different sizes on it as ornaments.  Then framed it with gold tinsel that also has shiny green holly leaves in it.  And she's wearing a headband with a reindeer sticking up on it.  Yeah, I can't imagine her not winning.

I brought in my Scensty warmer and put in iced pine for the scent up by the tree in the front of the office.  So we're set for a great afternoon.

And I don't mind not winning although the basket looks to be a good one.  Our boss made up a basket with some chocolates, a snow globe, a candle, a bottle of wine, a gift card to Starbucks and some other things that I can't remember right now.  So although I would like to get the basket I'm ok that I won't since I got the last one.

In November before Thanksgiving we had a contest when the Bears played the Ravens.  We had to pick who would win and what the score would be.  I chose the Bears and the score as 24 to 17.  It ended up being 23 to 20.  I was only off by 4 points so I won the Yule log 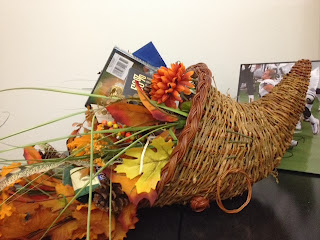 So in that basket there was a bunch of chocolate items, cashews which I gave to HDT since I don't care for them, the movie Water for Elephants, a scented candle, a Starbucks gift card, a gift card to an Italian deli/restaurant down the street from our office and a bottle of champagne.  All told according to our boss it was around $80.00 worth of stuff.  Nice. So yeah, I'm ok if I don't get another one.

So we had our lunch and white elephant game and this is what I got: 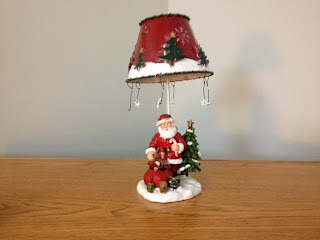 It's really cute so at first I was disappointed that it wasn't a true white elephant gift.  But when I put the shade on and it's all tilted I was all, ok this works.  It's still cute but you can tell it's been in someone's storage for awhile.  We haven't done the sweater yet but that'll be soon.


Media quote of the day:

Have yourself a merry little Christmas - Judy Garland in Meet Me in St Louis
Posted by Katrina at Thursday, December 19, 2013 No comments:

I had some trouble with the scissors 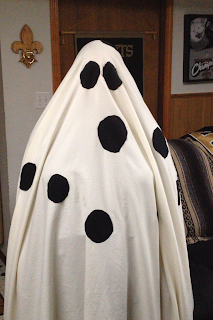 Media quote of the day;